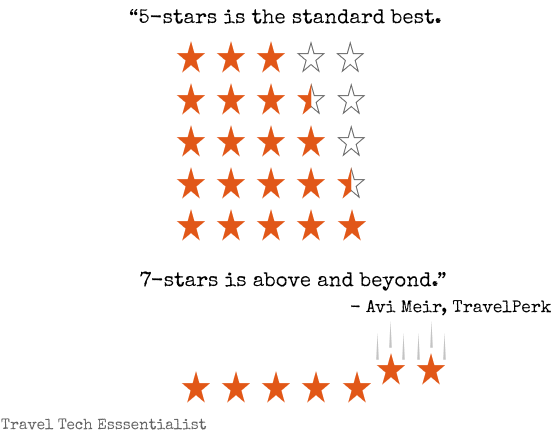 1. Build a Customer Advisory Board

Boards of directors and boards of advisors are common. Much less common are boards of customers. Listening to customers and incorporating their input is important throughout the entire company lifecycle, but particularly critical during the startup phase. This interview outlines the steps any startup can use to build its own Customer Advisory Board. It covers how to recruit members, gather high-quality feedback, keep relationships strong, and ultimately how to turn advisors into paying customers and advocates.

2. Making air travel better, not just safer, requires an understanding of what customers are saying

But how? In order to find travelers’ biggest frustrations with today’s state of air travel, Lufthansa Innovation Hub’s TNMT applied an unconventional approach that goes beyond typical consumer surveys. TNMT scraped more than 15,000 TripAdvisor airline reviews to get an industry-wide perspective on how travelers review their travel experiences. The data was sampled to phase out the COVID-19 impact (which would skew the data to customer service and refund issues) and then categorized. To objectively determine the most relevant pain and gain points, TNMT defined two dimensions to help gauge consumer reviews: relevance (how many mentions a specific topic has) and sentiment (positive, neutral, or negative). Take a look at the results. 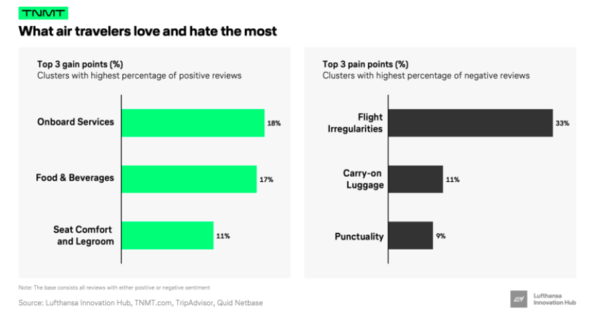 In this podcast, Avi Meir, founder and CEO of TravelPerk, discusses how the company’s core values have been instrumental in navigating the rough waters of COVID-19 without letting anyone go. Central to its core values is providing a 7-star experience. 5-stars is your best, but 7-stars is going above and beyond what customers expect. It sets a culture of continuously asking whether the experience provided for customers, partners or team members is going beyond what is expected, and whether it is consistently and surprisingly good.

4. How new approaches to interlining can better address both customer and airline needs

Old-style legacy interlining are restrictive and often come at the price of complex commercial agreements and inflexible rules for connectivity to other legacy systems like GDSs. At the opposite end of the spectrum are self-connecting “virtual interlining”, where the onus is on the connecting passenger to purchase separate flights from separate carriers for each leg of their trip, and to deal with problems if things go wrong in transit or with schedules changes. Startups like Air Black Box are building a “third generation” of interline: systems that connect multiple airlines’ inventories (including ancillary products and services) but without the complex integrations and headaches of legacy systems; that provide airlines with visibility of the passenger’s whole journey; and that allow the airlines to deliver a consistent and uninterrupted passenger experience. Read +.

In my previous newsletter, I mentioned how the hotel industry was going through a “great rethinking” process as it can no longer rely on overnight travelers as its single driver of demand. One big opportunity is to become a leisure and work hub for remote workers. This week, citizenM Hotels took a step in that direction. It announced a corporate subscription program that looks like a great work-sleep-meet-entertain alternative for remote workers. For €550 / month, companies get:

6. Venture firm Howzat is raising $120 million to find the next Trivago or Airbnb

Howzat Partners’ new fund expects to make average investments of around $650,000 (roughly double its typical investment until now) and plans to make 50% of its investments in travel and transportation startups. Howzat, based in Luxembourg, has been a prolific investor in young companies that are often not showing revenue yet. It was an early investor in Spotahome in 2014 when it only had €500 in revenue and 4 years before the Spanish startup closed a $40 million round with Kleiner Perkins. Howzat’s most profitable investment has been Trivago. Some of its current portfolio companies are doing better this year than last year, such as Spain-based startups Glamping Hub, ByHours and Lodgify. Read +.

7. US flight passengers inching up

Daily data from the U.S. Transportation Security Administration shows that the number of flight passengers going through US airports is increasing steadily, nearing 50% of same day of 2019 volume. This is still below hotel performance (August 2020 U.S. hotel occupancy was 68% of Aug 2019) , but flight passenger volume is at least pointing in the right direction, albeit slowly. 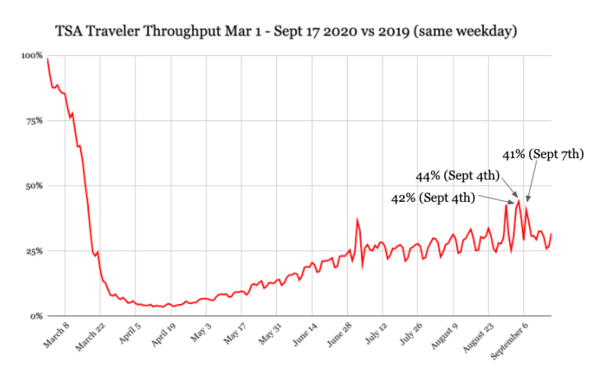 Elaborated from daily data from the Transportation Security Administration

Digital nomads seem to be going more mainstream. Not only companies like Airbnb and Anyplace are shifting their strategies to better serve long-term stays. Short-term operators such as hotels and vacation rentals are pivoting to long-term stays because they expect demand to recover slowly and see longer stays as a lasting trend. Read +.

Last week, Thomas Cook’s owner Fosun International relaunched the Thomas Cook brand in the UK as an online travel agency. The brand’s July relaunch in China was described as a success with more than 170.000 customers. Fosun’s plan is to launch a handful of multifunctional bricks-and-mortar Thomas Cook concept stores starting with Shanghai early next year. The first store will feature attractions such as skiing machines and ski instructors, cafes serving exotic drinks and children’s education classes. Fosun, which also owns Club Med, has big ambitions: “We want to test a lot of things in China which in the future can be launched globally. These new-style concept stores show our commitment to having a solid offline presence, building on physical resorts like the Club Med chain.” Read +.

👍 If you like this newsletter, I would appreciate if you forward it to a friend/colleague or recommend it on social media. And hit reply to send me feedback, ideas or suggestions. Thank you!

For your security, we need to re-authenticate you.